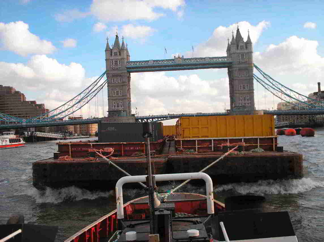 Sainsbury’s has launched a cunning stunt to trial food deliveries on the River Thames.

Greenbang remembers when supermarket Sainsbury’s complained to a magazine he used to write for.

A reporter had called Lord Sainsbury a ‘grocer’, and the company wasn’t happy about it.

Greenbang thought that was funny – but now it’s become cool to be local, green, ethical and wear sacks etc, the supermarket has made a U-turn in its marketing.

London’s oldest grocer ;), Sainsbury’s, has trialled a more environmentally-friendly way of delivering food to its stores. The supermarket has recently transported food on the Thames, as it did originally in 1869, showing that history does repeat itself.

The journey would mean that once food is dispatched by a Sainsbury’s distribution centre in South East London, the day’s delivery for the store would be shipped by barge, rather than by road, arriving in close proximity to the west London store. If rolled out to stores in the same area, this could save 350,000 road kilometres every year.

Moving freight to the river could contribute to Sainsbury’s new target of reducing CO2 emissions by 25% by 2012; outlined along with other tough targets in its corporate responsibility report issued this week.

The trial is one of many projects Sainsbury’s is exploring to be more energy efficient, particularly in the area of transport and operations, where it aims to reduce the distance its fleet and suppliers travel by 5 million kilometres by 2010.

A number of new future targets have also been set, including: