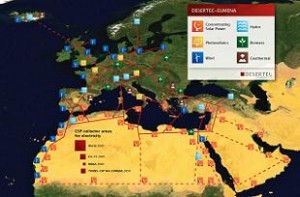 Desertification is a dirty word, but deserts are not entirely without their uses. Plans are underway to transform swathes of the Sahara into a glimmering sea of mirrors, with the goal of piping cheap, clean and efficient solar energy into the heart of Europe.

Dubbed the Desertec Industrial Initiative, it will create vast fields of concentrated solar power (CSP) plants — arrays of mirrors which focus the sun’s energy to turn water into steam, and so drive electrical turbines. From there, the power will flow through a network of low loss transmission cables to pipe electricity into the existing European grid, via Spain.

The £240 billion venture, which brings together such big energy names as Siemens and E.On, is designed to meet as much as 15% of Europe’s fast-rising electricity demand by 2050. And the first electrons could be coming onstream in as little as five years’ time …

This, says Jonathon Porritt, is something of a second coming for CSP. “It was first introduced after the oil shocks of the 70s and early 80s, but as soon as oil prices fell, all investment in that particular technology stopped.”

But now that the cost of carbon is playing into the economics of energy production, CSP is looking increasingly promising. According to Keith Bowen, director of engineering at UK-based Circadian Solar, it holds two trump cards: efficiency and scale.

“It scales extremely well,” he says. As the size of the plant increases, the relative costs come down. Large CSP plants can produce power for a quarter of the cost of that generated by standard solar photovoltaics, adds Bowen.

Efficiency is improving rapidly, too. Twenty years ago, the maximum efficiency you could get from the sun was 15-20%, compared with over 50% for fossil fuels. “Today,” says Bowen, “(CSP is) closer to 40%.”

And for those who live in or near deserts, that means it can also play a role in securing another vital asset: water. CSP is ideally suited to powering desalination plants. Taking salt out of water is a simple enough process, but one that uses a lot of energy. For developing countries where power shortages are a growing problem, as well as luxury resort islands where resources are scarce, Bowen argues, CSP could be an ideal solution — producing clean water and power at the same time.

A common criticism directed at both solar and wind power is that they’re inherently intermittent: the sun only shines in the day, the breeze doesn’t always blow. But recent advances in CSP could keep the power flowing all night long. Desertec is designed to operate 24 hours a day by superheating water to temperatures of 260ºC, sufficient to create steam at high enough pressures that it will keep driving turbines and generating electricity long after the sun has set.

An alternative approach, which is being explored by Solar Reserve in California, is to use the thermal energy to melt salt. Molten salt retains heat long enough to drive a turbine for much of the night. The company is hoping to build a 150MW solar plant in the Sonaran Desert, which would use 17,500 mirrors, each 24 metres wide, to heat salt to 565ºC. This would be enough to store up to seven hours of the sun’s energy.

There’s a lot of promise in this sort of approach, says Bowen. “It’s been around for a while and is fairly well developed.” But, he says, like other forms of CSP, it tends to work best on a grand scale, typically plants of 50MW or above.

Another development that should also help to spur CSP is the availability of better solar maps. These are detailed layouts of the earth’s surface that show historical information about the amount of sunlight different locations receive. These data sheets have long been available from places like the US Government’s National Renewable Energy Laboratory in Colorado, quantifying typical solar trends in different geographic regions. Now companies like 3TIER in Seattle, Washington, are making it possible to target locations for solar power not just by general region but at much higher resolutions. This enables prospective CSP developers to zero in on ideal sites.

3TIER’s maps are the first to take into account not just solar activity but also the impact of long-term and seasonal wind variations. These can be significant between locations just a few kilometres apart, and affect the energy required to continually readjust the position of the mirrors.

Using this sort of approach, it has become possible to choose sites that will optimise energy output, says Gerry Wolff, coordinator of DESERTEC-UK, an independent advisory group of CSP enthusiasts. In fact, he says, it’s been calculated that a single patch of the Sahara, just 114,090 square kilometres in area, receives enough sunlight to meet the entire world’s electricity demands through CSP.

So what’s stopping us? Partly cost, says Wolff. Hovering at around 10-20 US cents per kilowatt hour, CSP “looks a little bit on the expensive side,” compared with gas at about 5 cents. But this is likely to change when the volumes increase, he says. Indeed, three studies carried out by the German aerospace industry suggest that CSP could eventually become one of the cheapest sources of electricity in Europe. “Until about 2017, electricity from CSP will probably be more expensive,” concludes Wolff. But then, as economies of scale kick in, it will become cheaper and increasingly attractive.

It is certainly attracting growing interest. The World Bank recently announced it is investing $5.5 billion into the development of CSP across North Africa. And last year, Morocco, the only North African state with no oil production of its own, declared its intention to become a pioneer in CSP as a way of cutting reliance on oil and gas imports. It plans to build five plants with a total energy production of 2,000MW by 2020.

In light of such investment, the Desertec Industrial Initiative seems less of a leap of faith. The technology to transmit the electricity across the vast distances to Europe has been well established for decades, says Wolff. But realistically, it only needs to reach as far as Spain, since Europe already has an international electrical transmission grid. This, Wolff adds, acts a bit like a pond, in the sense that it doesn’t matter where you fill it up from. “So countries as far north as Sweden would immediately benefit.”

The consensus on CSP now, says Jonathon Porritt, is that although it’s extremely ambitious, it’s also quite realistic. Besides the potential to generate vast amounts of electricity, the growing need for renewable sources of desalinated water makes CSP an excellent candidate for support, he says.

The irony is that in years to come we may find ourselves looking to deserts not just for power, but also for water.

Editor’s note: This was a guest article by Duncan Graham-Rowe that originally appeared in Green Futures. Green Futures is published by Forum for the Future and is the leading magazine on environmental solutions and sustainable futures. Its aim is to demonstrate that a sustainable future is both practical and desirable — and can be profitable, too.