arctic6
Over the last couple of years, thin, broken-up and “rotten” Arctic sea ice has duped satellites into identifying it as thick, multiyear ice, scientists... 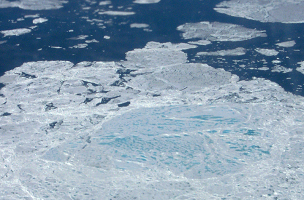 Over the last couple of years, thin, broken-up and “rotten” Arctic sea ice has duped satellites into identifying it as thick, multiyear ice, scientists have found.

Satellite data in 2008 and 2009 appeared to indicate that Arctic sea ice cover had started to grow again after reaching a record low, leading some to claim that global warming was reversing. However, University of Manitoba researcher David Barber found that wasn’t the case after he viewed the ice firsthand this September from an ice breaker travelling through the southern Beaufort Sea.

What the satellites had identified as thick, multiyear ice, it turned out, was in fact thin, “rotten” ice, Barber and his colleagues discovered.

Contrary to recent satellite data, the researchers also found that the loss of the remaining, healthy, multiyear sea ice is speeding up. Their findings have been accepted for publication in the American Geophysical Union’s peer reviewed journal, Geophysical Research Letters.

“These are very significant findings since the scientists and public all thought that sea ice was recovering since the minimum extent in 2007,” said Barber, a professor of environment and geography and Canada Research Chair in Arctic System Science.

During Barber’s ice breaker voyage, he and his colleagues discovered that multiyear sea ice was not as ubiquitous as it appeared in satellite remote sensing data. Much of the multiyear ice that did exist was so heavily decayed the ship easily broke through floes six to eight metres thick. Indeed, through most of the journey, the vessel sailed at an average speed of 24 kilometres per hour; its open water cruising speed is about 25 kilometres per hour.

“Ship navigation across the pole is imminent as the type of ice which resides there is no longer a barrier to ships in the late summer and fall,” Barber said.

What fooled the satellites? When observing sea ice, satellites shoot microwaves at the icescape and, among other things, record how those waves scatter. Each variety of ice was thought to have its own unique scattering characteristics which researchers could read to determine where certain species of ice reside.

However, Barber and his colleagues discovered that both multiyear ice and “rotten” ice have similar near-surface temperatures and similar near-surface salinities, as well as similar open water and new sea ice fractions at the surface. The satellite microwaves from both behaved similarly enough to create a case of mistaken identity.

“Our results are consistent with ice age estimates that show the amount of multiyear sea ice in the northern hemisphere was the lowest on record in 2009 suggesting that multiyear sea ice continues to diminish rapidly in the Canada Basin even though 2009 aerial extent increased over that of 2007 and 2009,” the published study paper states.

“This has significant implications for assessment of the speed of global climate change impacts in the Arctic and for increased shipping and industrial development in the Arctic,” Barber added.