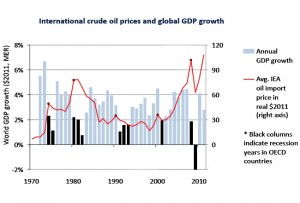 Oil prices and the broader economy are linked in complex ways, but there’s no question the connections are critical.

While the investment, banking and mortgage sectors receive the greatest blame for nearly crashing the global economy in 2008, oil prices — which reached a record high of $146 per barrel in July of that year before rapidly spiraling downward — also played a part. And while recent spot prices haven’t reached those eye-popping levels, the average this year has pushed past the 12-month average seen in 2008.

That’s serious cause for concern, according to Fatih Birol, chief economist for the International Energy Agency (IEA).

If oil this year averages $120 per barrel (Brent crude is currently around $122 per barrel, while West Texas Intermediate is just under $103 per barrel), the world’s oil-importing countries will spend a record high of $5.5 billion per day on net imports. That’s $2 trillion over the course of a year.

“The current price levels are on average higher than the awful year of 2008, and as such have the capacity to tip the global economy back into recession,” Birol said.

China alone has seen its spending on oil and gas imports more than double between 2009 and 2011.

Japan and the EU are feeling unique oil-based pains for different reasons beyond price alone. With its shutdown of most nuclear power plants in the wake of the Fukushima disaster, Japan is facing electricity shortages and its first trade deficit in decades. Meanwhile, austerity measures coupled with a drop in the euro’s value against the dollar have magnified the impact of rising oil prices in Europe.

At today’s prices, both the EU and the US can expect to spend 2.7 percent of their GDP on net oil imports this year, compared to their average of 1.4 percent from 1990 to 2010. Across all OECD (Organisation for Economic Co-operation and Development) countries, net oil import costs are likely to hit 2.3 percent of GDP … and every $10 increase in the price of oil will add another 0.2 percentage points to that amount.

Those figures put recent comments from the US Energy Information Administration (IEA) in an especially poor light. Responding to an October 2011 letter from the Association for the Study of Peak Oil & Gas USA (ASPO-USA) to Energy Secretary Steven Chu, Howard Gruenspecht, acting administrator of the IEA, wrote last month:

“(T)he existence of world oil prices greater than historical highs is not necessarily the result of limited oil resources … When oil prices rise, consumers have the incentive to reduce their demand for those oil-intensive energy services, upgrade to more efficient technology, and/or substitute other energy forms to satisfy the same energy services. For example, biofuels can be substituted for gasoline and diesel; and natural gas can be substituted for diesel and residual oil to generate heat and electricity.”

Even at today’s high oil prices, no country will be able to scale up biofuel production at a rate fast enough to compensate for their rising oil import costs. To even suggest that’s an easy substitution is glib at best.