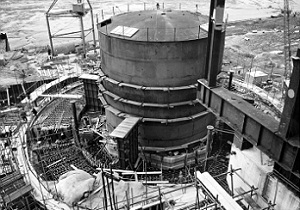 It was a different world for nuclear power stations when Oldbury came onto the scene in the UK in 1967.

Back then, nuclear power, though still facing opposition from some segments of the public, did not call to mind names like “Chernobyl,” “Three Mile Island” or “Fukushima Daiichi.”

On the other hand, back then, gas in the US was 33 cents a gallon, the world’s population was just under 3.5 billion and “peak oil” wasn’t controversial because most people hadn’t ever heard the term.

“Oldbury has been producing low carbon power for four decades now, making a significant contribution to meeting the UK’s electricity demand,” said Charles Hendry, Minister of State for the Department of Energy and Climate Change (DECC). “Plans for a new nuclear power station adjacent to the current site are an encouraging sign that Oldbury will play a role in our energy future too.”

Decommissioning the old plant will take years — DECC refers to “decades to come” — as spent fuel is removed, waste is managed and the buildings themselves are eventually demolished.

Among Oldbury’s odder claims to fame: it has appeared in several television shows — including Doctor Who — over the years, and was even featured on “Top of the Pops” when the group Slade recorded a performance for the show on the pile cap.