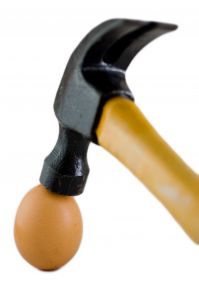 That’s right, we said ‘welch’. For any Americans reading, it’s British English for ‘back track’ or ‘break’.

In this case, it’s a group of countries, including the UK, which have welched on a promise to pay more than a billion dollars to poorer countries cope with climate change.

The Guardian has this mother:

The group agreed in 2001 to pay $1.2bn (£600m) to help  poor and vulnerable countries predict and plan for the effects of global warming  as well as fund flood defences, conservation and thousands of other projects. But  new figures show less than £90m of the promised money has been delivered  Britain has so far paid just £10m…

Under the terms of the climate adaptation agreement, made at a UN meeting in Bonn in 2001, the EU, Canada, Norway, Switzerland, Iceland and New Zealand said they would jointly pay developing countries $410m (£200m) each year from 2005 to 2008.