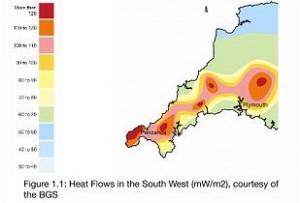 Peak oil might have been on the minds of business leaders who met in a behind-closed-doors summit with Britain’s energy secretary this week, but there’s another critical commodity that the UK should be paying attention to, according to a new paper: heat.

Published as England bids farewell to its coldest winter in over 30 years, the white paper — “Energy: It’s the heat, stupid!” — argues that heating energy should be viewed as a valuable commodity that, if generated by the right sources, could be a more effective way to decarbonise the economy than changes in transport systems.

Developing renewable heat would help to both meet the UK’s rising energy demands and replace its ageing energy infrastructure, argues author James Woudhuysen, who’s a visiting professor of forecasting and innovation at De Montfort University in Leicester. Furthermore, with focused government support, large-scale renewable heat production, such as that generated by geothermal plants, is needed to provide a supply that’s essential to safeguarding Britain’s energy future.

(I)t’s time Britain got serious about generating heat, period,” Woudhuysen writes in the paper, sponsored by Geothermal Engineering Ltd. In countries like Sweden, Denmark and Finland, he notes, “fully a third of heat comes from renewable sources.”

Those sources include combined heat and power (CHP), which uses the same fuel to generate both electricity and heat, and district heating, which uses centralised boilers to provide heat for whole blocks of flats or an entire neighbourhood of homes and businesses.

Similar technologies could be implemented in the UK to meet the nation’s rising demand for heat, Woudhuysen argues, pointing out that, since the 1970s, the average temperature at which Britons keep their homes has risen from 12 degrees C to 18 degrees C.

In his paper, Woudhuysen welcomes Britain’s new Renewable Heat Incentive (RHI), which in April 2011 will begin offering cash to homeowners, businesses, organisations and communities that turn to heat sources other than gas, electricity or oil. Today, those three sources provide 94 per cent of the nation’s heating needs.

“Britain’s RHI is the world’s first scheme to offer cash in return for renewable heat, CHP, and district heating,” Woudhuysen writes. “Under it, an adequately insulated semi-detached house installing a ground source heat pump could receive £1000 a year; if the GSHP replaced oil-fired central heating, annual savings could amount to £200 a year. These figures are modest, and, sadly, at this stage, the scheme does not specifically cover some emerging technologies such as deep geothermal energy — which, with the right investment, will deliver not only extensive electricity, but also even larger amounts of pure heat to local areas. But if the RHI is properly built on, the chance is that, by 2020, no less than 12 per cent of Britain’s heat will come from renewable sources.”

“The UK is pursuing too few renewable energy options and projecting totally unrealistic timeframes for national projects such as new off-shore wind farms,” Woudhuysen says. “We need investment in a broader palette of energy options to meet future demand for energy, and the government needs to recognise that sooner rather than later.”

“The UK government has started to take renewable heat seriously, but we have some considerable catching-up to do in a very short period of time,” adds Ryan Law, who is managing director of Geothermal Engineering Ltd, a company planning Britain’s first commercial-scale geothermal power plant. “Germany, for example, has been building up renewable heat supplies for years and this development is heavily supported by their government. The UK has good untapped geothermal resources which could provide low-cost heat for towns, hospitals or schools, but we need our government’s support to make it happen.”