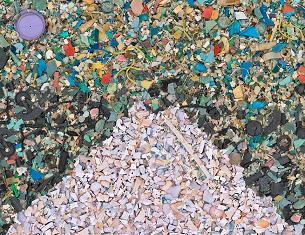 It’s not environmentalists selling us a “doom-and-gloom” future, but our culture of consumerism that’s telling us everybody on the planet can — and should — have everything we want.

That message, promoted by business, the media and government alike, is unsustainable and setting us on the path for a future in which we’ve exhausted Earth’s resources, according to a new report from the Worldwatch Institute. And that will bring a sudden end to the “more and ever more stuff” lifestyle.

(For some of the figures at the heart of that prediction, see our post, “By the numbers: Making the case for a ‘less-stuff’ culture.”)

Rather than continuing blithely on our current path are until that happens, the Worldwatch Institute advises, we would be better off shifting our global culture from one that promotes consumerism to one centred on sustainability. And there’s nothing “gloom and doom” about that shift.

If anything, Assadourian says, “consumerism is the doom-and-gloom scenario.”

In fact, as the multi-author report lays out, a groundswell of support for a sustainable culture is already building. It offers a number of hopeful examples in its pages, including:

“While sustainability pioneers are still few in number, their voices are growing louder, and at a moment of profound economic and ecological crisis, they are being heard,” writes Worldwatch Institute president Christopher Flavin in the preface to the new report. “As the world struggles to recover from the most serious global economic crisis since the Great Depression, we have an unprecedented opportunity to turn away from consumerism.”

Editor’s note: The image accompanying this post is an extreme closeup from Chris Jordan’s Gyre, which recreates a 19th century Japanese woodblock print using 2.4 million tiny pieces of plastic waste — which is equal to the amount that enters the world’s oceans every hour. The Worldwatch Institute used Jordan’s artwork for the cover of its “2010 State of the World” report.