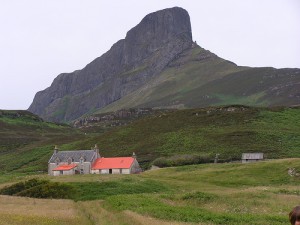 The tiny, remote Scottish island Eigg is aiming to become the country’s first ‘green power’ island after winning a £20,000 grant for making it to the final of Nesta’s Big Green Challenge competition.

Unless it’s home to a secret underground power station Greenbang can’t imagine that Eigg has a massive carbon footprint to begin with, but that’s us just being picky.

In fact, the plucky islanders have detailed their CO2 emissions, the targets they want to achieve by next year and how they plan to do it.

The island calculated its CO2 emissions per household at 9.6 tonnes back in February this year. That has already been reduced to 6.2 tonnes using a ‘renewable grid’, with a target to reduce it further to 4 tonnes by November next year and down to a tiny 2.75 tonnes by 2012.

The ‘renewable grid’ went online in February 2008 and uses a mix of wind, solar and hydro power, with the aim of reducing the traditional dependancy on diesel generators.

If the island of Eigg wins a share of the £1m total prize fund it aims to fund other projects, including installing solar thermal panels in 15 more homes, investing in wood fuel business, buying six electric vehicles to be leased to residents and installing an anaerobic digester to produce compost and reduce waste.

This may only be a drop in the ocean in the big scheme of things but it highlights the very real difference that individuals and small communities can make, and it also reminds us of the emphasis not only on new clean technologies and alternative sources of fuel but the need to reduce consumption and carbon footprint in tandem with those efforts.

Anyway, have a look for yourself on the island’s website here.

Photo Credit (of a mountain called The Sgurr on the island of Eigg): monkeypuzzle on Flickr