Religious leaders decree: thou shalt not change the climate 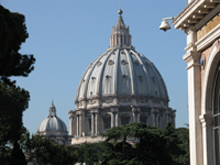 Greenbang’s knowledge of Christian theology may be a little sketchy, but she’s pretty sure that when Moses clambered up Mt. Sinai to receive the 10 Commandments, God neglected to mention to him the sin of being a bad earthly tenant.

To Greenbang’s relief though, God’s current broadcast channel, the Vatican, has swung to the planet’s rescue by upgrading environmental vandalism to the status of ‘mortal sin’ – namely a sin heinous enough to see you cast into Hell’s furnaces, according to The Daily Mail. The Southern Baptist Convention too has found it in its heart to overturn its once firmly held scepticism about global warming and has backed a declaration urging greater action to combat climate change.

The Catholic Church’s latest hit list of what you ought not to do, published in its official organ, L’Osservatore Romano, has ranked the pollution of the environment as being as offensive to God as coveting thy neighbour’s wife and nicking their TV, the Daily Mail reports. The Southern Baptist Convention has also recognised the moral imperative not to despoil the world, for theologically speaking, doing so is to despoil his most holy creation.