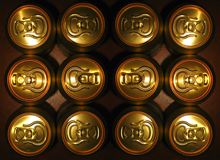 Imagine a world where recycling is rewarded with free beer. No beautiful daydream this: Greenbang has been to this utopia and is here to tell you the good news.

Being a fan of the tunes, Greenbang has just spent the weekend at a music festival where she got the chance to see some cunning greenery at work. All beers at the festival were sold with a one dollar surcharge, which the festival drinkers could claim back against their next drink when they returned their drink container to be recycled.

Four ‘recycling stations’ were set up to accommodate the music and beer fans seeking to swap their cans and bottles for a buck. In fact, most of the recycling stations had more people queueing than the beer tents.

Pretty soon, a whole economy had sprung up – the cash poor, time rich would pick up the cans and bottles dropped by their less environmentally concerned counterparts, carting around huge bags of empties to earn themselves some free drinks. There were even teens arm wrestling for an empty.

It’s one of the cleanest festivals Greenbang has ever been to – hardly a can or a plastic bag could be found. Having seen the system at work, Greenbang would like to see it extended to cigarette butts and crisp packets and before long festivals will be cleaner than the average high street. Shame about the toilets though.