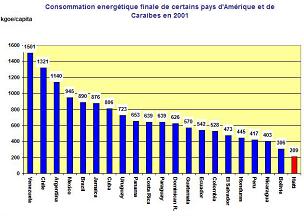 While food, water and medical aid remain the top priorities in earthquake-stricken Haiti, the longer-term task of rebuilding will require a major overhaul of the nation’s energy infrastructure.

As of 2008, the country of some 10 million people produced no oil, coal or natural gas, and relied primarily on electricity for its main power source, according to the US Energy Information Administration. Most of that electricity comes from thermal plants that burn biomass (a problem fuel, considering the level of deforestation) or from hydropower, but it’s not nearly enough to meet the population’s needs. In fact, a 2006 report by Haiti’s Ministry for Public Works, Transportation and Communications stated that per capita electricity consumption in 2000 was just 84 kilowatt-hours, “the least amount in the Caribbean area.”

The report also noted that only 12.5 per cent of the population is regularly connected to the grid, although illegal connections account for a significant amount of consumption as well. Even so, electrical service is spotty at best, with frequent outages and maintenance problems.

Wind and solar power would both have great potential in the country, but not until other problems — poverty and education, in particular — are tackled first. Expensive photovoltaics, for example, are prone to theft and hard to operate because there aren’t enough trained people to maintain them, the 2006 report pointed out. In fact, a 150-kilowatt wind farm installed on the island in 1978 fell prey to similar obstacles and was shut down within two years because of a lack of technical maintenance skills.

However, that could all change if only the right energy programme could be put into place as Haiti rebuilds from the earthquake.

“This natural disaster provides an opportunity to help rebuild Haiti’s infrastructure,” says Patty A. Walton, director of benchmarking services for the energy research organisation UtiliPoint. “A stronger, more abundant power production could lay the ground work for Haiti to grow, and even prosper as a tourist attraction one day.”