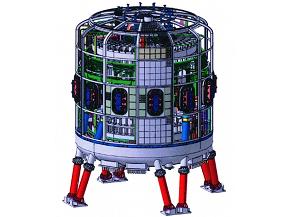 They’re not making any immediate promises, but Italian and Russian researchers say a new type of fusion reactor being built to study the physics of stars could also end up being the first device to produce a self-sustaining fusion reaction — society’s long hoped-for source of clean and endless energy.

Scientists have been trying to harness fusion energy — the energy released when two atomic nuclei are forced together to form a heavier nucleus — for decades. Despite many advances over the years, though, the only successful reactions achieved so far have been the uncontrolled releases of energy from hydrogen bombs.

Currently, two major research projects are aimed at developing working fusion reactors: the international ITER project in France and the National Ignition Facility at the Lawrence Livermore National Laboratory in California. While the California effort recently reached a new milestone in tests, the ITER project has been scaled back and appears unlikely to crack the fusion challenge anytime soon.

Under a new agreement reached between Russia and Italy, though, a different type of fusion reactor will be built on the site of the Kurchatov Institute’s existing reactor outside of Moscow. The Ignitor will be a second-generation device based on a design developed by Bruno Coppi, a physics professor at the Massachusetts Institute of Technology (MIT). Coppi’s original reactor, dubbed the Alcator, was conceived of in the 1970s as a way to simulate the conditions on stars to better understand how they behave.

“It was set up to simulate the X-ray stars that we knew at that time,” Coppi said. Once the Alcator began operating, though, “we found we were producing plasmas (hot gases of electrically charged particles) with unusual properties,” he said. Those findings indicated the reactor design could eventually lead to sustainable fusion.

Coppi will be the principal investigator for the new Ignitor project.

The Ignitor will be about twice as large as the the current version of the Alcator reactor — named Alcator C-Mod — at MIT. However, it’s expected to be much smaller and less expensive than the ITER reactor being built in France.

The Ignitor will not only be a “very compact, inexpensive type of machine,” according to Coppi, but could be ready to start operating within just a few years. The design has been refined to produce high plasma current densities, high degrees of gas purity and conditions conducive to fusion ignition.

“The whole point of Ignitor is to find out how a burning plasma behaves, and there could be pleasant or unpleasant results coming from it,” said Roscoe White, a distinguished research fellow at the Princeton Plasma Physics Laboratory. “Whatever is learned is a gain. Nobody knows exactly how it will perform, that is the point of the experiment.”

If all goes well, the new knowledge gained from the Ignitor tests could eventually lead to “reactor designs much smaller and simpler than ITER,” White added.

Ironically, the president of Moscow’s Kurchatov Institute — Evgeny Velikhov — is also chair of the ITER council. When it comes to pursuing the goal of a sustainable fusion reaction, though, Coppi said, “there’s no competition, we are complementary.”