Quiet year ahead for green VCs 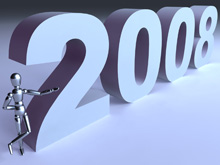 While VCs are planning a quiet year for 2008 – spending $1bn less than last year. If that’s what you call a quiet year, Greenbang will be having a practically silent one. Anyway, needless to say, green tech is still on top of the spending agenda, according to a survey of VC types on accountability-central.com.

In the survey, respondents showed growing enthusiasm for clean technologies in 2008, with 80% saying they will increase investments in this sector.

In 2007, VCs invested about $2.5 billion in cleantech companies, or 9% of all funds invested. That percentage has risen steadily from 2% in 2003. Among the largest VC investments in 2007 was the $100 million pumped into GreatPoint Energy, a Massachusetts-based company that converts coal and biological material into natural gas.

The survey goes onto say that around a quarter of those polled reckoned they will spend up to 39 billion – almost as much as was spent during the bubble. Is green tech going to the next bubble since the internet boom? Greenbang would like to know your opinion. VC funds to the winner!