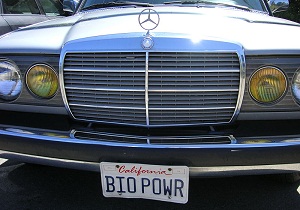 What else is crude oil but ancient sunlight in liquid form, a fuel distilled from the remains of tiny photosynthesizers that lived in the world’s oceans some 300 million years ago?

If that kind of ancient sunlight is becoming more expensive and harder to get, could we run our cars with distilled sunlight of a different, more recent kind? Say, for example, wood or crop waste?

Of course, that’s the idea behind everything from corn-based ethanol to Craig Venter’s quest for a genetically modified organism that can produce bio-oil. The ultimate goal is to find the easiest, most cost-effective way to make large quantities of “drop-in fuel” that can keep the world’s cars, trucks and planes running even as crude oil becomes ever more costly.

While it touts the growth of domestic oil and gas supplies, for example, the Obama Administration continues to seek alternative sources of transport fuel. Just last week, the US Department of Energy (DOE) announced it will provide up to $15 million in funding for projects demonstrating renewable, biomass-based oil supplements that could be seamlessly integrated with today’s gas, diesel and jet fuels.

In the same vein, one of the world’s newer petro-powers — Canada — is also throwing a bit of cash toward research into bio-based liquid alternatives to oil from Alberta’s “tar sands.” Ontario’s Centre for Research and Innovation in the Bio-Economy (CRIBE) has just announced up to $6 million in an effort to “develop a new approach to converting underutilized wood to fuel.” Under that program, paper and pulp company Domtar plans to work with the research organization Battelle on ways to use “fast pyrolysis” to convert bio-waste to fuel.

Fast pyrolysis heats biomass without oxygen to produce both bio-oil and biochar, a type of charcoal some see as a solution for boosting soil fertility and safely sequestering carbon dioxide in soil. That method differs from other approaches — such as using micro-organisms that can “digest” woody waste — for extracting fuel from bio-based materials. While research continues in those areas as well, many of those approaches have yet to yield results that are either scalable or affordable.

Cellulosic ethanol, for example, has been a long time coming … and continues to be, despite US government efforts to legislate supplies into existence. So too has Joule’s promise of Liquid Fuel from the Sun™.

“It will be good news for everyone if we are successful,” Bruno Marcoccia, director of research and development at Domtar, said of the latest bio-oil effort in Canada.

It certainly will, if …