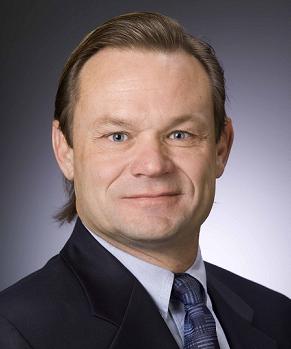 Our pals at the Matter Network sent us this interview with sustainability expert George Kehler.

Is it Greenbang, or does he look a bit like the movie and dance man Patrick Swayze?

George Kehler has 15 years of managing energy resources and setting energy policy. While working for Dow Chemical he oversaw efforts to reduce the company’s energy bill and purchased renewable energy assets. Now, as Director of Sustainability and Carbon Management, at expense management company Cadence Network, he works with clients on their sustainability and carbon reduction initiatives. He spoke with Matter Network about large corporation’s varying viewpoints on sustainability and strategies for simultaneously reducing emissions and costs.

Matter Network: When you were working at Dow Chemical the company joined a group that was purchasing green energy. Why?

GK: Dow is a large energy consumer…. [we recognized that] the economy is driven by hydrocarbon energy and that there are a finite amount of hydrocarbons left at a reasonable price. The forecasts said that oil energy will be peaking between 2010 and 2020 and will only get more costly. Also, the amount of CO2 that is being produced and our constantly consuming fossil fuels is not a sustainable action for a big energy consumer like Dow or for the world at large.

If you are looking at increasing shareholder value, it is not just the profits that you make — it also has to do with stock price. Companies that are admired may be more attractive to certain investors.
MN: How does investing in renewable energy today line up with a corporation’s shareholder interest?

GK: Wind is pretty darn close compared to fossil fuels as an energy source in a lot of areas. Solar energy cost has significantly dropped, but it is still clearly more expensive. At face value they may not be cost effective, but through rebate programs and tax incentives, and when you start to go through a true financial analysis and have accelerated depreciation, you can make the case for wind and solar. Because of these tax breaks you can start bringing down the cost to where from a shareholder value perspective, it is cost effective.

MN: Is there additional business value for companies that are viewed as being sustainable?

GK: Being admired will have an impact on a corporation. Fortune magazine did a survey and found that of the top 10 most admired U.S. companies, 7 have written sustainability or corporate responsibility reports. None of bottom 10 produced these reports. If you are looking at increasing shareholder value, it is not just the profits that you make — it also has to do with stock price. Companies that are admired may be more attractive to certain investors. Also a college kid might be more likely to consider working for an admired company, so they will attract more talent. Forward thinking companies understand that [being admired for sustainability] has value.

MN:: How does the risk of fluctuating energy prices factor into a company’s cost assessment?

GK:: Risk is a factor for estimating energy expense. With wind most of the cost is in the capital to install a tower and turbine. When you buy power from a wind farm you can fix your price, with perhaps a slight escalation. Oil prices change almost minute by minute. Companies looking at long term power costs can commit to long term investment. But interest in long term commitment depends on the customer. It is influenced by what they think will happen in the marketplace. If you believe that energy prices will drop, you don’t want to commit to energy costs today. Each company has different perspective — some may want to fix 50 percent of their energy cost to reduce variability.

MN:: Why are companies paying more attention to sustainability than in years past?

GK:: Energy is no longer cheap, and it is having a huge impact on many companies. Since 2000 oil has gone from $20 per barrel to more than $90. A lot of companies are bringing back the technology that was originally developed in the 1970’s with new twists and turns. There is a huge drive for energy efficiency at many organizations, and they are pushing for it in Washington D.C. They recognize that not consuming a kilowatt of power is much cheaper than trying to produce an extra kilowatt.

MN: What is typical reason for companies to resist measuring their sustainability?

GK: The two biggest issues are cost and time. Some people within companies work very hard to get management to agree, but unless we get senior management to buy in, it is tough to push something through. Fortunately, it is becoming quite common for senior management to be discussing sustainability. It is becoming ingrained in the board room. The toughest challenge in working with some clients is the upfront cost — sometimes you have to spend money to make money. Also, taking the time to look at their carbon footprint is a cost. For companies, it comes down to “Do you want to be proactive or reactive?”

MN: How likely is it that the federal government will institute a carbon cap and trade system, and how is it factoring into your recommendations?

GK:: California’s climate change initiatives have made people deal with this issue. I don’t believe federal legislation will happen in 2008, but expect it in 2009 with a new president and a new congress. Various bills are being discussed and introduced. We’ve clearly passed the tipping point — it’s not a question of if but when for a carbon cap system. Companies today have two choices, wait and do nothing until you see the legislation and then react, or they can react now and understand what their carbon emission position is so that they are prepared to respond as legislation rolls out.

MN:: What are companies doing with the money that they are saving through energy efficiency?

GK:: Some companies take some of those savings and use it to understand the carbon footprint, while others will use it to buy renewable energy if it costs more. It is a forward thinking thing to do for those companies.