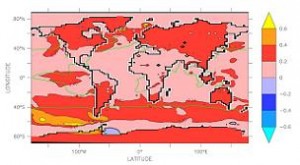 And so another geoengineering fix for climate change that sounds great in theory bites the dust on closer examination.

The fix in question seems promising at first glance: pump nutrient-rich deep ocean water to the surface, where it can provide a hearty food source for algae. The algae bloom in abundance, then die and sink deep underwater, taking the carbon they absorbed during photosynthesis with them.

In reality, though, the process isn’t likely to work so well, according to detailed modeling conducted by researchers at Germany’s Leibniz Institute of Marine Sciences (IFM-GEOMAR).

Putting the geoengineering strategy to the test, the scientists found it has little potential for making a serious dent in man-made carbon emissions. At best, they concluded, the method might help eliminate about three gigatonnes’ worth of carbon a year — a literal drop in the bucket, considering we send 36 gigatonnes of carbon dioxide into the atmosphere each year.

Even more interesting is the fact that some of that carbon reduction wouldn’t come from algae sinking to the ocean bottom, but from the atmospheric cooling effect of pumping cold deep water to the surface. The cooler air would cause a slowdown in decomposition of organic matter in soil, meaning less carbon sent back into the atmosphere.

“This effect is global and occurs even far away from the area where the pumps are used, which makes an assessment of success or failure of such a method extremely difficult in practice,” said Andreas Oschlies, lead author of the study.

Like many other geoengineering strategies that have been studied, this one also comes with a considerable downside: stop pumping cold water to the surface for whatever reason, and global warming returns with a vengeance.

“(W)henever the pumps stop, atmospheric CO2-concentrations and surface temperatures increase rapidly to values that are even higher than those of a control simulation that never employed the artificial pumps,” Oschlies said. (The map accompanying this article shows the additional surface warming (in degrees C) we could expect by 2100 if we pursued the deep-water pump strategy between 2011 and 2060, then stopped it.)