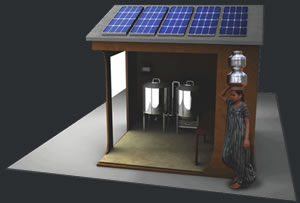 The company plans to target businesses in emerging economies that need cold storage. In countries where grid electricity is unreliable, companies rely on expensive and polluting diesel back up generators.

The refrigeration technology is called thermoelectric cooling, which doesn’t require any moving parts, and is based on the Peltier effect – which is when a current passes through a circuit of two dissimilar conductors there is a rise or fall in temperature depending on the direction of the current flow.

Up until now it has not been efficient, limiting its use to small applications in consumer electronics such as computer micro-processor cooling blocks. But Promethean has now been able to develop this technology for large scale use.

You can find out more from Promethean directly here.

According to tech news website CNET News.com Promethean has also raised a round of angel funding from the Quercus Trust, which will allow the company to build another prototype solar powered refrigerator.