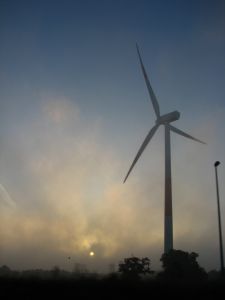 By the firm’s own admission, BT is something of a power hog: it chomps 0.7% of all the power in the UK. One company, nearly 1%.

But to its credit, it’s just launched an enormous project that will see up to 25% of its energy being generated by wind farms. Good on it.
The £250m project will be fully online by 2016 and will generate some 250MW of power — enough to power 122,000 homes, according to the firm’s release.

It’s all good stuff. And the company is pretty good about losing carbon in other ways. In fact, it’s on a carbon diet:

1. Reduce our footprint
0.7% of all electricity consumed in the UK is used by BT and we emitted 0.64 million tonnes of CO2 in 2007 – equivalent to 400,000 return flights from London to New York.  We have already reduced our CO2 emissions by 60% since 1996.  Our target is now an 80% reduction by 2016.  We’re doing this by improving energy efficiency and using green electricity.

3. Influence our suppliers
We now require our suppliers to reduce the energy consumption of the products and services they sell to BT.  This will help reduce our CO2 emissions and encourage suppliers to think more about the environment too.

4. Involve our employees
We’re encouraging our employees to get involved and reduce the energy they use at home and at work.  Even simple actions like turning off PC’s during meetings can make a big difference.  We’ll be holding roadshows globally to tell employees what we’re up to and how they can get involved.