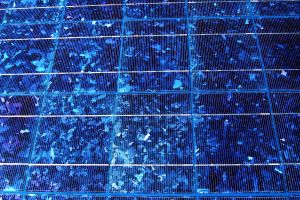 One of the issues with solar cells is the amount of sunlight they convert into electricity – and this conversion rate currently isn’t brilliant.

But a team of physicists and engineers at MIT in the US have used computer simulations to boost the output from solar photovoltaic cells by as much as 50 per cent.

How have the MIT boffins done this? They applied an anti-reflection coating to the front and a combination of multi-layered refelective coatings and tightly spaced array of lines to the backs of ultra-thin silicon films, which cause the light to bounce around longer inside the silicon layer, giving it time to deposit its energy instead of just being reflected back out into the air.

Lionel Kimerling, the Thomas Lord Professor of Materials Science and Engineering, who directed the project, said:

“The simulated performance was remarkably better than any other structure, promising, for 2-micrometer-thick films, a 50 perc ent efficiency increase in conversion of sunlight to electricity.”

The computer simulations were validatetd by actual lab-scale tests and the MIT team will report the findings on 2 December at the Materials Research Society’s annual meeting in Boston.

The MIT researchers say production of a commercially viable, improved solar cell is possible within the next three years.

In short this could mean cheaper and more efficient solar power, which is vital to make it a viable alternative to traditional non-renewable energy sources.