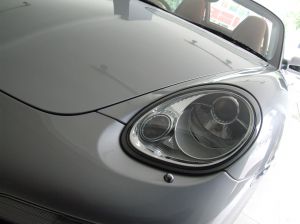 The company is so bitterly opposed to the charge, it has even launched a website and petition to fight the tax.

“Following its launch of a judicial challenge against Mayor Ken Livingstone’s emissions related congestion charge, Porsche today released an examination of the expected CO2 savings. Using Transport for London’s own figures, the savings expected in an entire year from the emissions charge will be equal to the emissions from Heathrow between 4 minutes and at most 4 hours.

Commenting on the figures, Andy Goss, Managing Director of Porsche Cars GB, said, “Under closer examination these figures show the negligible environmental benefits of this tax. The emissions saved are a fraction of the amount of the CO2 pumped out every day at Heathrow. Calling this tax an emissions charge is a misnomer. Not only is this new charge an unfair tax on motorists and families, it is a tax that will do nothing to reduce emissions or congestion in London.”

The release of this examination comes the day after Porsche announced that it is seeking to make an application for judicial review of the proposed extension in the congestion charge, which will see the cost of driving some cars in the capital rise from £8.00 a day, or just 80p if they are residents in the congestion zone, to £25.00 a day – an increase of over 3000 per cent. Porsche is seeking a reverse of this action based on the disproportionate nature of the charge.

Porsche also announced today that it has opened a website for the legal case where families and motorists across London who will be impacted by the new tax can get more information and add their name to a petition against the charge. The website is available at www.porschejudicialreview.co.uk.”

Greenbang thinks Porsches are sweet cars, but surely with all that motoring R&D knowhow, they could come up with technology that beats the emission and engine-size problem. That would be a winner all round…