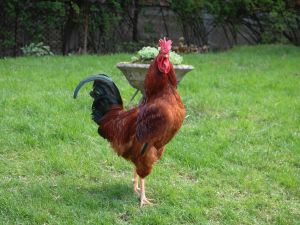 Estimates suggest the overhauled plant at Dequingyuan will cut CO2 emissions by 95,000 tonnes per year. Not bad for 14,600 MWh of electricity per year.

“An anaerobic digester will treat waste material and produce biogas that powers two gas engines. The heat generated during the process will be cycled back in to the fermentation process, as well as heat the farm and all those chickens during winter…so they can poo more. Nice loop, isn’t it.”

I doubt Jaime Oliver or Hugh Fearnley-Whittingstall will be all that happy that the chickens are still being battery produced, but I guess you have to handle things one step at a time. And it gives a whole new meaning to the term battery hens…