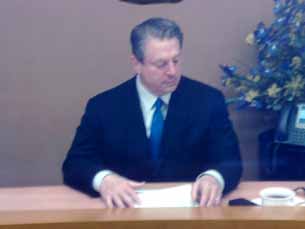 Greenbang today went along to a panel discussion with Al Gore – the man – and John Chambers, CEO of Cisco Networks.

The cool thing was that it was all done over Telepresence (posh video conferencing for you and me) between a few different locations.

We (the UK journos) were in London (Tower 42), Gore was in Nashville and Chambers was in San Jose.

In it, Gore talks about his proposals for a new tax scheme to reward people for greener actions.

Chambers goes on quite a lot about collaboration and communication as the way forward. While Telepresence is very cool, we think such a big IT vendor should be putting more of its thoughts into direct alternative-energy use for its products. And manufacturing.

Anyway – it’s about 48 minutes, if you can stomach it.

Greenbang has deliberately avoided talking about the problems of climate change, oil depletion and so on. Instead we opted for looking at the suggested answers.

But listening to Gore, you do have to wonder if we shouldn’t shove the odd climate change scare story in the mix, if only it would shunt a few more people to action.