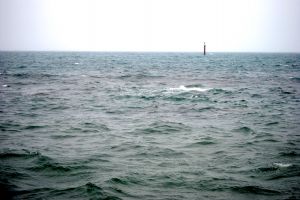 Carbon capture and storage (CCS) is undoubtedly the hot green topic of the moment. Hardly a day goes by without a new story on it and even the mainstream newspapers are writing enthusiastically about it as a potential saviour of the planet.

As we’ve pointed out here on Greenbang many times before there’s a whole other line of thinking that CCS might not be all that its cracked up to be and that it might actually end up being an environmental disaster waiting to happen.

Now a consortium led by SocttishPower is investigating the possibility of using a rock formation discovered in the North Sea that has the potential to store all of Europe’s CO2 emissions for the next 600 years.

The consortium is planning to adapt two of the four burner units at Longannet power station in Fife, the largest in Scotland, to use CCS technology by Norwegian engineering group Aker, which strips out carbon dioxide using chemical solvents. The gas is then pressurised and liquefied, allowing it to be piped along existing gas and oil pipelines to the storage areas beneath the North Sea.

“Longannet has the potential to become the centre of excellence for this technology. It is perfectly placed because of its proximity to the Central North Sea where the long-term storage options are excellent. It contains depleted gas fields which could be used for initial capture and an expansive under-sea aquifer which reports show has enough capacity to store all of Europe’s CO2 for the next 600 years. It could become a hub, handling carbon emissions from all over Scotland and the North of England.”

Other players in the consortium include Marathon Oil Corporation, Aker Clean Carbon and Aker Solutions.