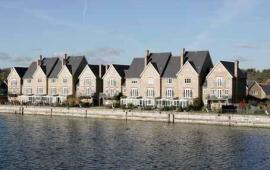 In a £9 billion redevelopment project, the UK Housing Ministry has plans for a 40 mile-long ‘eco-region’. It’s proposed the Thames Gateway would be water-neutral (meaning no extra water would be used), feature carbon-zero buildings and span from Canary Wharf to Southend in Essex and Sittingbourne in Kent.

The Thames Gateway is proposed as an “eco-region” using new environmental technologies and higher environmental standards than previous U.K. development projects. That designation includes energy savings modifications to reduce the carbon emissions of existing homes in the region by 60 percent. Newly built homes would be completely carbon neutral.

Most interesting is the assertion that the project can be water-neutral, meaning the region will not require the use of additional water despite the plethora of new homes being built and people moving in.

“The project is in keeping with the U.K. government’s goal to require all new construction homes to be carbon zero by 2016”, Yvette Cooper, U.K. minister for housing and planning, said in a statement.

Greenbang wonders if this will become the offset for ‘Crossrail‘ – the proposed high-speed underground railroad across London and South-East.