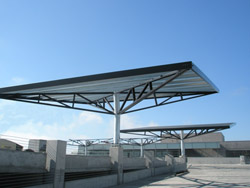 While energy experts elsewhere are looking for answers to one question — How do you keep electricity flowing through a renewable energy grid when the sun doesn’t shine or the wind doesn’t blow? — researchers in California are approaching the challenge from the opposite direction.

The question they’re asking: How can you let grid operators know in advance when it’s likely the sun won’t be shining or the wind won’t be blowing?

Researchers at the University of California, San Diego, are working to develop advanced tools that can let electricity distributors know just that. They hope the technology can help energy companies create more efficient schedules for fossil fuel-fired power plants and energy-storage facilities for the times when renewable sources fall short of demand.

Currently, California has a goal of generating 33 per cent of its power from renewable energy sources by 2020.

“If we can correctly forecast the distribution of solar irradiation and wind patterns within a small margin of error, we could rely more on alternative energy sources and less on power generated by fossil fuels,” said Jim Blatchford, who is senior policy representative for the California Independent System Operator (CAISO), a non-profit that coordinates, controls and monitors most of the state’s electrical power grid.

One solution might lie with a project team led by Jan Kleissl, assistant professor of environmental engineering at UC San Diego. Using data from 16 weather stations on the 1,200-acre campus, Kleissl and his team have been able to measure solar radiation every second and map clouds continuously. They then took that information to generate a model that uses satellite data to predict how moving clouds will affect the power output of 6,000 photovoltaic panels on campus.

“Once a cloud arrives, the power output from our photovoltaic panels can decrease 40 to 80 per cent within a few seconds, and when the cloud leaves the power output increases just as dramatically,” Kleissl said. “Utilities and operators of large power plants want to be able to predict the timing of these transitions so that they can charge up energy-storage systems in advance to ‘smooth’ the clear-cloudy transition or prepare other generation to make up for the lost solar power.”

“In the future,” added Byron Washom, who’s principal investigator for a second research effort under way at the university, “electricity generators and energy-storage facilities of all scales will likely be able to bid into an hourly market, and the ability to accurately forecast photovoltaic output one to three hours in advance, despite the variability of the solar resource, would be of immense economic, environmental and operational value.”

In Washom’s project, researchers are working to develop tools for dealing with the voltage dips and electricity flow reversals that come from connecting photovoltaic arrays into the grid. Managing such technical challenges is a new area for the state’s power companies, and it’s one that’s expected to become increasingly significant as California adds more solar energy to its supply mix in coming years.

“This effort is one of many we are involved in to ensure that we are able to accommodate higher levels of intermittent renewable energy without any adverse impact on reliability, an issue that is critical to SDG&E,” said Lee Krevat, director of smart grid for the utility company. “We are the first utility in the continental US to commit to a 33 per cent renewable energy goal.”