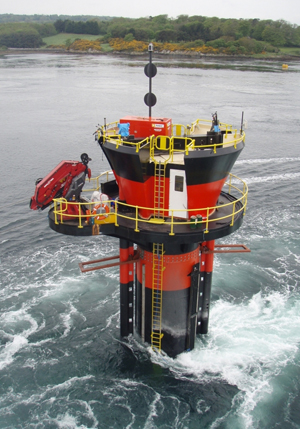 Don’t say we don’t spoil you. Earlier this month, Greenbang brought you the news of Marine Current Turbines’ SeaGen turbine up and running in the sea off Strangford Lough. Well, now Greenbang has pictures to share.

Greenbang realises in retrospect that the fact she has pictures to share is blindingly obvious but will press on regardless.

Here is the 1.2 MW bad boy in all its fashionable red and black glory.

It’ll be tested for 12 weeks and then, if all is to everyone’s satisfaction, it’ll start feeding electricity into the Northern Irish grid.

Once its fully operational, it should be running for at least 18 hours a day and chuck out enough power to run 1,000 homes. 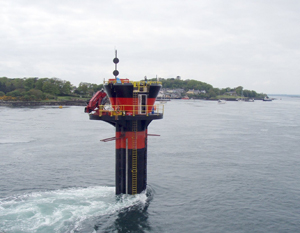 As you can see from the pictures, the SeaGen turbine is what scientists call “bloody massive” and getting the thing actually in place took six weeks.

If you’re wondering just how bloody massive SeaGen is, Greenbang can enlighten you: it weighs 1000 tonnes and it rotors are 16 metres in diameter. 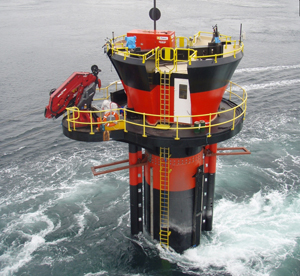 If the residents of Strangford Lough don’t like the Dennis the Menace look of the turbine, they’ll have five years to learn to love it, as that’s how long it’s licensed for.

This isn’t Marine Current Turbines’ first foray into the world of bloody massive turbines. It’s had it first bite of the cherry way back in 2003 with the Seaflow tidal energy system, which was installed at Lynmouth in Devon.