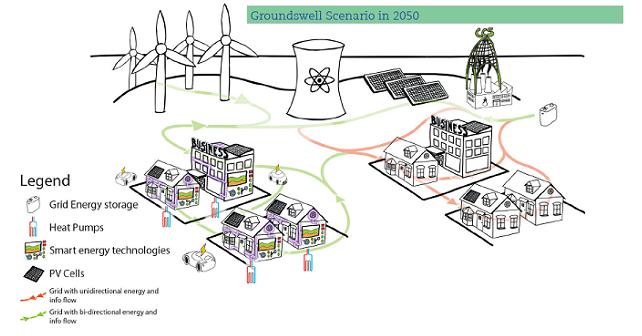 There are lots of different ways to define the “smart grid,” but a new study shows people prefer an approach that promises to reduce their energy expenses and lets households generate a significant amount of their own electricity.

“Scenarios for the Development of Smart Grids in the UK,” a new report from the UK Energy Research Centre, found that people were most in support of a “Groundswell” approach led by strong consumer engagement with an increase in distributed, community-generated energy.

A “Minimum Smart” scenario got the least support. However, people surveyed for the study also expressed concern about data protection and privacy in the smarter-grid scenarios.

Improving public engagement in the grid improvement process is important to address such concerns, the report found:

“The public does appear to understand the lifestyle benefits afforded by various smart technologies, although there is a widespread perception that the risks and/or costs of smart grid implementation will be borne by consumers, whilst the financial benefits will flow to system actors, particularly power companies. This perception of the uneven distribution of costs and benefits is compounded by the widely-felt distrust towards the industry, both of which must be overcome if they are not to act as a hindrance to smart grid development.”

“The UK’s electricity grid is fast becoming outdated, as new technologies and new behaviors change the way we use and supply power,” said project leader Nazmiye Balta-Ozkan, who’s with the University of Westminster’s Policy Studies Institute. “Our increased use of intermittent renewables and electric vehicles will require more intelligent ways of managing and delivering energy. But energy suppliers and the government need to be switched on to consumer concerns about this transition.”

The study concludes that a “high degree of uncertainty” continues to surround the future of smart grids in the UK:

“This applies not only to the general public, but also to those working in and with the industry, for whom stronger vision and leadership in the long-term would reduce risk, uncertainty and expense substantially. Some of this uncertainty might reasonably be expected to be mitigated by coordinated government action but some will require sectoral stakeholders to respond with new approaches to risk management and adopt new business models to address the ‘broken value chain’ problem.

“The need for government transparency and long-term predictability applies equally to drivers for a smart grid: solid commitment to renewable energy targets to 2030 and beyond, for example, is essential if the infrastructure of the future is to accommodate much more unpredictable and more decentralized power flows and the technologies needed to manage them.”