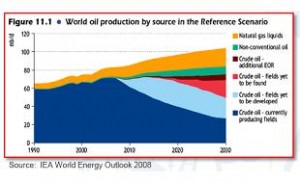 The words “peak oil” are being heard more often these days, and in increasingly exalted corridors, but what do they actually mean? Mere inconvenience and higher prices at the pump? Or TEOTWAWKI (for “the end of the world as we know it”)?

Let’s look at some of the scenarios various experts have have imagined:

All in all, not quite TEOTWAWKI, but perhaps one version or another of the veiled curse, “May you live in interesting times.”