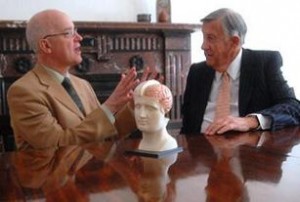 Big-money investments might be hard to come by these days, but Oxford University has beaten the odds by raising $100 million to support research into some of society’s most pressing problems.

The university’s fund-raising goal was launched last year, when James Martin — one of the world’s top computer scientists and Oxford benefactor — issued a challenge to the school: raise $50 million in the next 12 months, and I’ll match that amount.

And match it the university did, thanks to donations from 30 different philanthropists (including George Soros and Adrian Beecroft), charities, corporations and research bodies. With those funds in hand, Oxford now has the funding available to move forward with nearly 20 critical research projects to study everything from how to ensure food and fuel security in the 21st century to how to prevent future economic shocks.

“When the matched funding scheme was announced, many people said this is crazy timing as this is the worst economic crash in recent history,” Martin said. “The Oxford Vice-Chancellor and I disagreed with them. Some foundations and wealthy individuals give money in bad times if the cause is exceptionally important. The James Martin 21st Century School at Oxford has demonstrated that it can identify the most serious dangers and opportunities of our future. Some great people from across the planet have been attracted to the school’s vision and this will lead to inspired thinking.”

Martin enabled the creation of the James Martin 21st Century School in 2005 with an original endowment of $100 million. He offered the latest funding challenge to inspire new research and opportunities at the school for collaborative thinking to address the global problems and opportunities now facing humanity.

“These new resources will enable us to advance our capacity to tackle some of the biggest and most complex challenges of our time,” said Ian Goldin, director of the James Martin 21st Century School. “These include climate change, financial crises, global demographic shifts, poverty and health.”