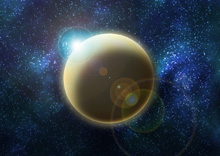 Stretch your mind back past the New Year’s Eve celebrations and the cold turkey that lingered over Christmas, back further – to Bali. While all the world’s worthies were set on conquering climate change, some people were thinking so far outside the box they didn’t share a postcode with it.According to the Associated Press, some folk at Bali were dreaming up innovative ways of conquering environmental problems, including pumping soot into the sky to block the sun. All sounds a bit Wacky Races to Greenbang.When you’ve finished laughing quietly into your tea, one equally unlikely idea is getting some influential backing – space power, where satellites would send back solar energy picked up cruising around the universe back to earth. Both the Pentagon and the island of Palau are interested apparently.

In September, American entrepreneur Kevin Reed proposed at the 58th International Astronautical Congress in Hyderabad, India, that Palau’s uninhabited Helen Island would be an ideal spot for a small demonstration project, a 260-foot-diameter “rectifying antenna,” or rectenna, to take in 1 megawatt of power transmitted earthward by a satellite orbiting 300 miles above Earth.That’s enough electricity to power 1,000 homes, but on that empty island the project would “be intended to show its safety for everywhere else,” Reed said in a telephone interview from California.Reed said he expects his U.S.-Swiss-German consortium to begin manufacturing the necessary ultralight solar panels within two years, and to attract financial support from manufacturers wanting to show how their technology — launch vehicles, satellites, transmission technology — could make such a system work. He estimates project costs at $800 million and completion as early as 2012.