Oslo’s 65,000 streetlights to get an IQ upgrade

Smart Grid107
The streetlights in Norway’s capital city are on track to become a whole lot smarter, with networked controls that will enable targeted dimming to... 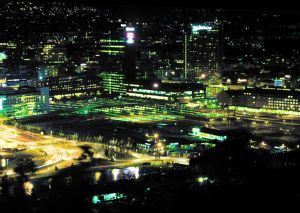 The streetlights in Norway’s capital city are on track to become a whole lot smarter, with networked controls that will enable targeted dimming to conserve energy, automatic switching and easier identification of problems and failures.

The improvements were set in motion when Oslo officials approved a contract with the French firm CITELUM, which plans to deploy an Echelon-based system for controlling all 65,000 of the city’s streetlights. CITELUM will install Streetlight.Vision software and Echelon’s Control Operating System (COS)-powered controller in 750 streetlight-control cabinets across the city.

Set to start in the fourth quarter of this year, the project is scheduled for completion at the end of 2012.

The Echelon-driven networking technology will also be able to support additional sensors and equipment. That could help Oslo eventually implement other city-wide “smart” services like speed- or density-based traffic control and monitoring of electric vehicle (EV) charging stations.

“There is a tremendous movement to connect and integrate the smart grid to the end-users’ systems and facilities such as street lighting systems or buildings,” said Anders Axelsson, Echelon’s senior vice president of sales, commercial markets.