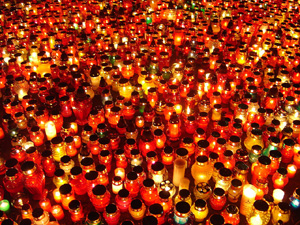 Greenbang has mentioned her titanic hatred of the Olympic (can we have the good TV back now please?) Games on more than one occasion so she’ll be quiet about it from now on in. She’ll just rock back and forth silently with barely suppressed rage instead.

Still, if you’ve been watching the progress of the Olympic Torch and wondering what’s the point (aside from giving the Chinese security folk a bit of a workout), then let Greenbang relay this little nugget, from Slate.

Slate reckons the flame – which, like any controversial celeb gets its own private airplane – will cover 50,000 miles in 20 countries and burn up 270,000 of jet fuel.

That’s the equivalent carbon footprint of 624 Chinese citizens for one year.

And that doesn’t even take into account all the gas generated by the propane-burning torches themselves.

Dear Olympics people,
When it comes to the London Olympics’ torch journey, can we just not and say we did?
Love, Greenbang xxxx