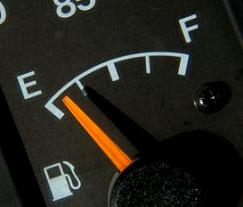 Even if you’re not concerned about climate change, there are growing signs we’re in a race against time in making the transition from fossil fuels to renewables.

The great looming question now is, “Can we shift to a low-carbon economy before oil becomes harder to get, unaffordable or both?”

“This is an urgent, clear and present danger,” said Will Whitehorn of Virgin Group, who is also chairman of the UK Industry Taskforce on Peak Oil & Energy Security (ITPOES). “And none of us are going to be thanked in 10 years’ time if the UK economy is suffering inflation, balance of payments issues and all the other things that could come from a world of expensive oil before our low-carbon economy, as the government calls it, kicks in a few years later.”

The task force today released an update to its 2008 report on how an oil crunch — likely within the next five years — could impact the UK and what the nation needs to do to avoid the worst fallout from such a crunch. The report comes on the heels of a study from Britain’s Office of the Gas and Electricity Markets (Ofgem) that warned of serious threats to the country’s energy security if major investments aren’t made soon.

The issue isn’t whether there is still plenty of oil in the ground: there is, as some of the world’s top oil executives assured attendees at last month’s World Economic Forum. It’s whether enough can be extracted at a rate that can keep up with demand as developing nations like China, India and Brazil rev up their economies and aim for Western-style lifestyles. And it’s whether the oil that’s extracted can be affordable.

If the answer to both those questions is no, the result will be an oil crunch in which society can’t keep functioning at current levels … since, as the new ITPOES report points out, “(v)irtually every sector of our economy
is still dependent on oil.”

The crunch might have arrived sooner had it not been for the global economic meltdown in 2008, which depressed demand for oil and oil-related products as people and businesses around the world dramatically cut their spending. In fact, some experts place part of the blame for the meltdown on the record-high oil prices that immediately preceded it.

“(I)t wasn’t too-big-to-fail financial institutions but the interest rate shock from soaring oil prices that deep-sixed the economies of both the US and the rest of the oil-guzzling world,” writes economist Jeff Rubin, author of Why Your World is About to Get a Whole Lot Smaller: Oil and the End of Globalisation. “Interest rates didn’t just rise from around one per cent to almost six per cent because no one was minding the store at the Federal Reserve Board. It was soaring oil prices that did all that heavy lifting.”

The financial meltdown brought down those record-high oil prices, but not as low as they’ve been in the past.

“The oil price has come down from its big peaks, but it hasn’t come down nearly as much as people expected in the recession,” Whitehorn said. “We’ve still got a relatively expensive oil price when demand has been declining in the Western economies.”

That should serve as a wake-up call for the British government, the peak oil task force report warns.

“There are two challenges for government and policy-makers,” the report states. “Firstly, to recognise the situation we
face, and secondly to take action to mitigate the worst implications of the crunch.

“Unless we do so, we face a situation during the term of the next government where fuel price unrest could lead to shortages in consumer products and the UK’s energy security will be significantly compromised. This has the potential
to hit UK business and commerce as well as the most disadvantaged in society with yet another crisis.”

What’s the solution? The report recommends that leaders tackle the issue through a combination of legislation and “encouragement” to reduce oil demand: