The fast-expanding shale gas industry in the US has hit a literal bump with the closure of several fluid injection wells that some believe could be connected to a flurry of earthquake activity in Ohio. 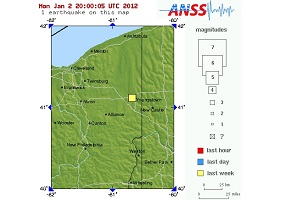 Reuters reports that five deep wells used for the disposal of “fracking fluid” — a liquid cocktail of chemicals used to open up underground shale gas formations in a process known as “hydrofracturing” — have been closed in the wake of a number of earthquakes in the area around Youngstown, Ohio.

The most recent quake, reported around 3:05 pm local time on Saturday, Dec. 31, measured 4.0 on the Richter scale, according to the US Geological Survey (USGS). While there were no reports of damage, some 4,735 people responded using the USGS “Did You Feel It?” website.

According to Reuters, Northstar Disposal Services first began injecting used fracking fluid into disposal wells in December of 2010. The first earthquake in the region was reported in March of 2011.