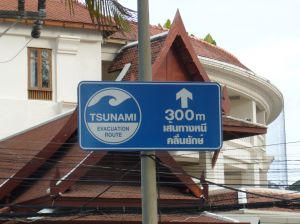 The networks of underwater communications cables that stretch across our oceans could have another valuable purpose … as an early-warning system for tsunamis.

US researchers report that tsunamis generate electric fields as moving saltwater — a good conductor of electricity — interacts with the Earth’s geomagnetic field. That electricity can apparently be detected by major submarine cables.

Manoj Nair of the University of Colorado, along with scientists at the US National Oceanographic and Atmospheric Administration, used computer models to determine how large an electric field was generated by the deadly 2004 Indian Ocean tsunami.

“We estimate that the 2004 tsunami induced voltages of about 500 millivolts in the cables,” Nair said. “This is very small compared to a 9-volt battery, but still large enough to be distinguished from background noise on a magnetically quiet day. By monitoring voltages across this network of ocean cables, we may be able to enhance the current tsunami warning system.”

Before that happens, though, scientists still need to find a way to distinguish tsunami-generated electric signals from other sources like the Earth’s upper atmosphere, which can create signals of up to 100 millivolts.

Tsunamis are created when large volumes of water are displaced by earthquakes, landslides, volcanic eruptions or even meteors hitting the ocean. The trouble with detecting them is that, while they generate catastrophic waves along the coast, tsunami wave heights are very small in deep ocean waters. In fact, people aboard vessels far out at sea might not even realise a wave that’s passing below them at the speed of a jetliner.

The current tsunami warning system relies on a global network of seismometers to detect earthquakes that could lead to the formation of deadly waves. The only current tools that can actually detect and measure a tsunami itself are deep-ocean pressure sensors and coastal tide gauges.