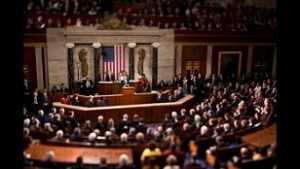 Whatever you think of climate change science, there’s no reason to oppose an assertive shift to clean and efficient energy, US President Barack Obama said in his first State of the Union address on Wednesday night.

“I know there have been questions about whether we can afford such changes in a tough economy,” he said. “I know that there are those who disagree with the overwhelming scientific evidence on climate change.

Transitioning to a clean-energy economy is the key to future job growth, Obama said … jobs that in recent years have gone to other countries while the US chose instead to spend on other things.

“You see, Washington has been telling us to wait for decades, even as the problems have grown worse,” he said. “Meanwhile, China’s not waiting to revamp its economy; Germany’s not waiting; India’s not waiting.

“Well, I do not accept second place for the United States of America.”

While making it clear that he remains determined to pass a climate change bill — which passed last year in the House of Representatives but has languished in the Senate — Obama also expressed support for other initiatives long preferred by the opposition Republican Party: in particular, more oil drilling and nuclear power plant construction. Tellingly, though, he specified expanded offshore drilling only, indicating that the Arctic National Wildlife Refuge will not be part of that programme.

“It means continued investment in advanced biofuels and clean-coal technologies.

“And, yes, it means passing a comprehensive energy and climate bill with incentives that will finally make clean energy the profitable kind of energy in America.”