NYC gets turbines on skyscrapers – or does it? 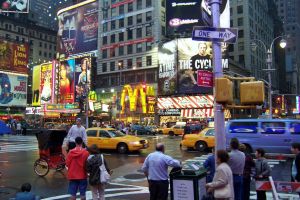 Greenbang’s a little confused this morning – confused by the words of Michael Bloomberg, New York’s Mayor. The fella gave a speech a couple of days ago to the National Clean Energy Summit. It sounded good. It went a bit like this:

“Today, we’re taking a step that will really kick alternative energy production into high gear in the Big Apple. It’s a ‘Request for Expressions of Interest’ that’s going out to firms with strong track records in producing renewable energy. We want their best ideas for creating both small- and large-scale projects serving New Yorkers.

Such projects might, for example, be designed to draw power from the tides of the Hudson and East Rivers – something we’re already doing on a pilot basis. They might call for dramatically increasing rooftop solar power production, which we’ve estimated could meet nearly 20 per cent of the City’s need for electricity. They could tap into geothermal energy. In fact, some private home and building owners have already drilled their own ‘heat wells.’ Or perhaps companies will want to put windfarms atop our bridges and skyscrapers, or use the enormous potential of powerful off-shore winds miles out in the Atlantic Ocean, where turbines could generate roughly twice the energy that land-based windfarms can. Windfarms located far off our shores, some evidence shows, could meet 10 percent of our city’s electricity needs within a decade.”

Appealing isn’t it? Wind farms on skyscrapers, maybe a turbine or two hidden in the Statue of Liberty’s headgear. It’s the sort of thing that cheers you up when you’re getting your coffee of a morning.

Then Bloomberg has to ruin it. A day after making that speech, he told Newsday he wasn’t sure about all that skyscraper malarkey.

“I have absolutely no idea whether that makes any sense from a scientific, from a practical point of view… Are you going to put a big windmill on top of the Empire State Building? I think that’s very unlikely. Can you put windmills off the coastline? That is highly likely.”

Bugger. Maybe next time it would be better to stick to the facts, and not just make up things that sound good. Or at least be a bit more creative: tell New Yorkers you’ve got Godzilla strapped to a giant treadmill able to power 3,400 homes.

Oh well. At least there’s still some offshore stuff that might be promising.

Here’s more on the details from Mr Mayor:

The New York City Economic Development Corporation, on behalf of the City, today released a Request for Expressions of Interest (RFEI) that will call for innovative ideas to help New York City develop sources of renewable energy. In addition to off-shore windfarms, these ideas could involve wind turbines on top of New York City’s bridges and skyscrapers and the generation of tidal power, solar power and geothermal energy. Responses to the RFEI are due September 19.