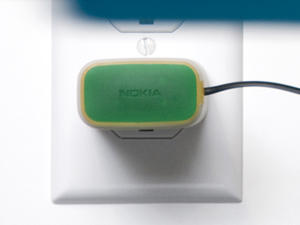 Sometimes the smallest things can have the biggest impacts. Take the Krankies, for example, or germs.

Nokia’s latest invention – on show at the company’s design event on this week – is one of those nice baby steps of energy efficiency that warm Greenbang’s cockles far more than they deserve to be by a tiny bit of technology.

And this picture is the invention in question – a charger. Not just any charger – oh no – but one of nine prototypes the folk at Nokia re working to cut the precious energy sucked out of the wall and into the chargers when people forget to turn off the charger when they’re done topping up the mobile.

A little more on those nine from our Nokia:

The first uses a button to charge, so leaving it plugged in means it doesn’t draw power and the user needs to hit the (green) button to set the charge in motion. The second simply charges the device for one hour before switching itself off whilst the third concept actually has a conversation with the device, where the device lets the charger know when it needs power, and when it’s all done.

That last is the ultimate objective but the team still have a way to go to make it happen. Right now the first is real and working and, I hope, will see it’s way into production before too long. Meanwhile Newman and his team are using the chargers every day, living with them and learning from them so one day we can all reap the benefits.