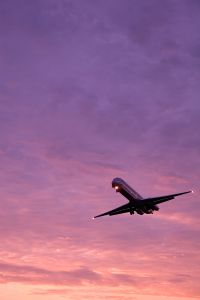 A combination of 11 different fuel-saving strategies helped the airline cut its fuel consumption by 1,564 gallons on a non-stop flight from Sydney, Australia, to San Francisco. The efficiency measures also reduced the flight’s carbon emissions by 32,656 pounds, airline officials said.

One of the airline’s strategies, dubbed Tailored Arrivals, cuts fuel consumption by bringing an airplane down for landing by continuous descent rather than in a step-down manner. United officials say that measure alone helps reduce the amount of fuel each flight needs by some 60 gallons.

Other efficiency measures included the use of airspace around Sydney that is normally restricted, as well as priority takeoff clearance, up-to-the-minute fuel data and new arrival procedures.

Said California Gov. Arnold Schwarzenegger, who was on hand for the flight’s arrival, “I am pleased to have seen first-hand the technologies that have helped our state be at the forefront of aviation’s future.”

Considering how much of his state is currently ablaze, it’s a wonder he could see at all.