Newsweek: the inside story of the climate change denial machine 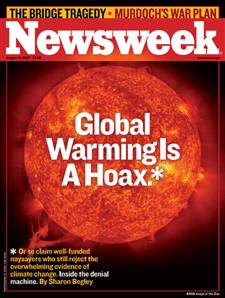 The list goes on and on inside Newsweek’s fascinating cover story: The truth about denial. It makes for jaw-dropping reading, when you realise that big business has been following the same tactics that the cigarette industry used when combating the notion that smoking causes cancer.

But outside Hollywood, Manhattan and other habitats of the chattering classes, the denial machine is running at full throttle—and continuing to shape both government policy and public opinion.

Since the late 1980s, this well-coordinated, well-funded campaign by contrarian scientists, free-market think tanks and industry has created a paralyzing fog of doubt around climate change. Through advertisements, op-eds, lobbying and media attention, greenhouse doubters (they hate being called deniers) argued first that the world is not warming; measurements indicating otherwise are flawed, they said. Then they claimed that any warming is natural, not caused by human activities. Now they contend that the looming warming will be minuscule and harmless. “They patterned what they did after the tobacco industry,” says former senator Tim Wirth, who spearheaded environmental issues as an under secretary of State in the Clinton administration.