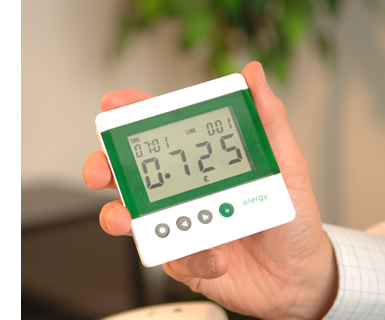 Efegy have launched an interesting new home energy meter, which allows people to track their power consumption in real-time.

Of course, meters like this aren’t new, but they’ve done a good job of trying to make this easy: no electricians or tools are required to install it, it just clips onto the main electricity feed and sends out a wireless signal to a sensor pad that you can put anywhere in the house.

It costs about £45, but the company reckons most people cut 10-15% off their energy bills as a result. On this Greenbanger’s monthly usage, we reckon we’d get a payback on it within a year, which sounds good.

This from the press release:

As the data on the screen of the Efergy meter is refreshed every five seconds, the impact on power usage of turning an electrical appliance on or off can be seen immediately. And by pressing the green Efergy button on the monitor, the real-time power load can be shown as total kW; or as pence per kWh; or as emissions measured in terms of kg of carbon dioxide, (kgCO2E).

“Being able to see at a glance how using electrical appliances in the home or office impacts on energy consumption means that users can quickly make decisions about which appliances to use and when to use them,” said Gary Martin, Managing Director of Efergy Limited.