Mushrooms: the new way to clean up pollution 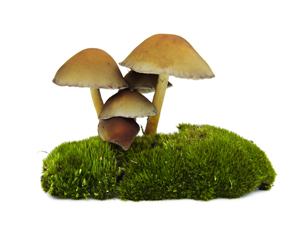 Greenbang will be throwing out her feather duster and jay cloths and replacing them with a shedload of fungi, if this story from International Herald Tribune is anything to go by. Nope, it’s not the first sign of incipient madness, but the latest way to clean up pollution.

Fort Bragg, a town of some 7,000 souls and by all accounts a picture postcard of a place, has an unfortunate problem with dioxins in some parts of its soil. Rather than take the soil and burn it or bury it in landfill, the citizens are turning to mushrooms to solve the problems.

Here’s how the fungus fix works, according to the Tribune:

Using the mushroom method, [Paul Stamets, author of “Mycelium Running: How Mushrooms Can Help Save the World.”] said, it is put in plots, strewn with straw and left alone with mushroom spawn. The spawn release a fine, threadlike web called mycelium that secretes enzymes “like little Pac-Mans that break down molecular bonds,” Stamets said. And presto: Toxins fall apart.

Apparently, two fungus heros are just the job for the dioxins destruction: turkey tail and oyster mushrooms, and if Stamets is right, they could get rid of the “less recalcitrant toxins” within 10 years.

The process is called bioremediation and it’s not the first time it’s been tried. There’s all this instance where an oil spill was cleaned up with mushrooms. And mats made of human hair.

Is Greenbang wrong to feel a bit queasy here?