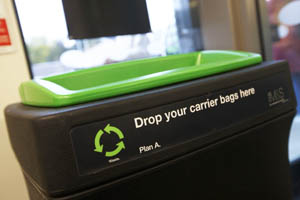 You have to love it when a plan works.  It seems that in the 10 weeks since the British retailer, Marks & Spencer, began charging five pence for its plastic bags 70 million fewer bags have been used.

The number alone is impressive, but the proportion is even more so.  Apparently, it’s an 80 per cent decrease. At the same time M&S has sold nearly 10 million of its own reusable hessian-bags.  The 1.85p per bag profit on the re-usable bags goes to charity and has already raised about £200,000 so far for Groundwork, an environmental charity.

Speaking to the Times, an unnamed M&S spokesman highlighted that the move is not harming the business:

“We are a retailer. If this was hurting us, would we still be doing it?”

Other supermarkets, such as Sainsbury’s, are running incentive schemes which gives a loyalty point for every bag you don’t use.  This will have to change in April, however, when the Climate Change Bill will force supermarkets to start charging.