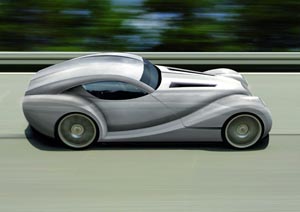 Greenbang doesn’t get excited very much anymore. He stayed up once too often on Christmas Eve waiting for Santa Clause but never saw him.  The experience has slightly jaded his view on life in fact.  As such, he has always been a bit dubious of events in the calendar.

That said, there is still one that has him bouncing around the room like the Easter Bunny (another being he stayed up for but never witnessed) The British International Motor Show.

The show rolls into London’s ExCeL centre this week and Greenbang’s reporter Rowan Horncastle has been lucky enough to gain access a day before the show opens, bringing you all the latest green orientated car news first.

This years show has got a “Greener Driving Pavilion and EV Village” showcasing all the latest alternative fuel technology. This includes the UK’s first electric taxi as well as other alternative fuel cars such as the Nissan X-TRAIL FCV, reviewed by Greenbang last week.

Greenbang will also be wandering around the other manufacture stands, green wash detector in hand, to try and see what the car firms are implementing to make themselves that little bit greener. First stop will have to be at Morgan, to see the deliciously designed Morgan LIFEcar.

The LIFEcar is fuel cell-powered electric vehicle with an exterior which has already caused a bigger argument in the Greenbang office than God vs. evolution ever managed elsewhere.  In a similar approach to the Tesla, Morgan has tried to produce an environmentally responsible sports car with impressive performance.

To see what it is really like you will have to wait until later this week.