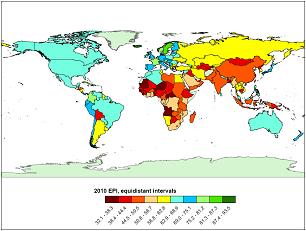 It’s not easy grading 163 countries on how each handles a variety of environmental challenges, but a team of experts working with the best information they could find has come out with a new global report card: the 2010 Environmental Performance Index (EPI).

The planet’s star performers? Iceland is number one, followed by Switzerland, Costa Rica and Sweden. The countries with the worst environmental records are, unsurprisingly, also some of the poorest: Angola, Mauritania, the Central African Republic and — coming in dead last at 163rd place — Sierra Leone.

Other countries’ rankings: Norway, 5th; France, 7th; Austria, 8th; Cuba, 9th; the UK, 14th; Germany, 17th; the US, 61st; and Russia, 69th. (The report card’s authors note that, “The United States’ ranking does not reflect the recent policy activities of the Obama Administration, as the 2010 EPI builds on data from before 2009.)

Prepared every two years by experts at Yale University and Columbia University, the EPI was released today at the World Economic Forum meeting in Davos, Switzerland.

In gathering data for each of those areas, the EPI team made some interesting findings:

Finally, Marc Levy, deputy director of Columbia’s Center for International Earth Science Information Network and one of the EPI project leaders, noted, “For some critical issues such as water, international investments have actually decreased in recent years.”