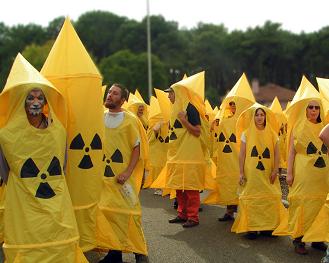 Is nuclear power green? Is it not the best example of green technology in action? That is what some people claim, and what the Queen’s speech in the UK supported today.

The Green Party, though, does not see it that way:

“Government support for nuclear power is disastrous, and means committing the UK to a dirty, dangerous and astronomically expensive future.

“Going down the nuclear route also means exposing Britain, and the world, to greater risk of terrorist attacks and nuclear war, as it increases the volume of nuclear materials available.

“It also ignores the advice of its own Sustainable Development Commission, established to advise the Government on environmental issues. The SDC concluded last year that there is no need for new nuclear power stations – saying the dangers and costs outweigh any potential benefits in terms of combating climate change or guaranteeing future energy security.”