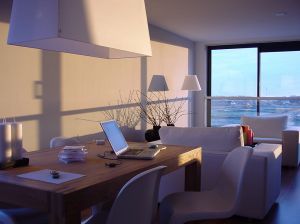 One of the debates that has been raging for some time is whether or not home working is better for the environment. On the one hand, you potentially take thousands of cars off the road; on the other hand, thousands of kettles are fired up during the day at home, along with lights and laptops.

Now a new study adds to the argument that the gains from home working outweigh the costs. (See the full report here, as a PDF.) As this article summarises:

The research, which was carried out by consultancy TIAX LLC, estimated that the 3.9 million US workers who work from home at least one day a week had reduced gasoline consumption by about 840 million gallons, equal to removing 2 million vehicles from the road every year. It also calculated that that one day of telecommuting saves the equivalent of up to 12 hours of an average household’s electricity use.

Of course, this is all based on US figures. And so the figures aren’t quite transferable to the UK, given the relatively larger number of public transport users here. Even so, it confirms a suspicious that Greenbang has held for some time: it’s always better to work at home…