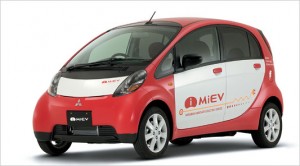 It was truly amazing to see the power that a really big stick can wield. When petrol was affordable people still used vast quantities of it. Hummers were popular. And, cheap holidays were the order of the day.

Over the weekend, a panelist on a BBC Radio 4 debate commented that the UK government had made a mistake by not increasing the tax on petrol, suggesting that it should have reduced income tax slightly instead to ensure green measures were kept in place.

The suggestion is probably right. The green car market has picked up a lot in previous year, with the Smart Car and Prius bucking the industry sales trend – by not plummeting.

And now, Mitsubishi wants a piece of the Prius action. In fact, it wants it so much that it will be increasing the size of its planned battery factory by a factor of five.

Apparently Mitsubishi is confident that the i-MiEV is going to be really popular. Not a bad assumption considering the popularity of the Smart Car, the fact that the i-MiEV is the vehicle of choice for renewable charging station testing, and the small matter of Japan’s postal service itching to go all-electric for their fleet. I wonder if their UK survey brought back signs of high demand as well.

The plant will be open in Q2, 2009 and will produce 2,000 batteries per year. But, the increase will come shortly after and the factory is expected make 10,000 per year there after.