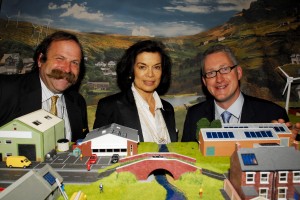 MPs and Lords have thrown their support behind an amendment to introduce a ‘feed in tariff’ to support smaller non-merchant renewable energy generation.

These tariffs pay people to generate green electricity and feed it back onto a the national grid, earning them a profit, helping them to pay for the set up costs of solar panels, turbines, groundwater heating systems and other sources.

A Friends of the Earth report said that 17 European countries have adopted a feed-in tariff system with considerable success. Driven by feed-in tariff legislation Germany generated 14.2 per cent of its electricity from renewable sources in 2007.

One of the backers is BBC eco-warrior Dick Strawbridge (pictured), the man with quite possibly the finest moustache on the planet. He said:

“Most people do not feel able to control their future, however if they become energy producers they future-proof themselves. As such, the amendment is needed now because a change in our attitudes to renewable energy does not happen overnight. We need people to realise that it makes sense and spending a little now could save them a lot over the lifetime of the system.”